When I was young the family owned a commercial fishing boat in Southeastern Alaska. Fishing is seasonal and when the salmon are running you’d best be out working if you expect to catch any. With a livelihood so dependent on the fish schools and weather we didn’t take many days off in the summer. But each year on the Fourth of July we would knock off early to celebrate Independence Day.

Where we were and who we were with always varied but one constant was that we would make homemade ice cream. We stored caught fish in a hold covered with ice so the key ingredient of crushed ice was always plentiful. The ice cream maker was hand crank and took long enough to freeze that everyone got a turn, starting with the smallest person and finishing with the strong men as the ice cream got to its final stages. This personal involvement made it taste oh so much better than anything store bought. It was the best.

Fast forward to today. We still celebrate Independence Day with family and friends but over the years we had gotten away from making ice cream. Two kids with lactose intolerance put a damper on the effort needed especially since they couldn’t enjoy the fruits of their labor. Still I’ve continued to have a yearning for the homemade treat. So when I ran across a recipe for coconut pineapple ice cream, made without regular milk I mentioned it to Mom. To my surprise they still had the old ice cream maker and a tradition resurrected. 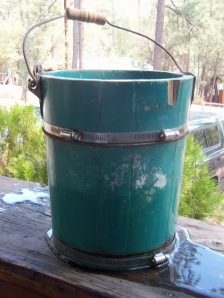 This ice cream maker is well over 40 years old.

The recipe we used came from Pineapple Coconut Ice Cream but we adapted it for our family. It can work for your vegetarian/vegan friends too. Mom had told me that her old recipe called for sweetened condensed milk and we were curious about how this would be replaced until a little research showed us that the Cream of Coconut was not ‘coconut cream’ but a mix used often for Pina Coladas and was a thick syrupy sweet delight with a lot of potential for dairy free holiday treats. I found the Cream of coconut in with mixers in the alcohol aisle. If you buy coconut cream in the ethnic aisle it may be a completely different product more like butter or just fat and without sugar.

This recipe was just right in our 2.5 quart maker. We tried it first with a half recipe and it was fine I think you could easily double it for a larger maker.

You will also need crushed ice and rock salt. Table salt will not work. Bigger cubes of ice will work but are not as easy to handle.  If you are using an ice cream maker, either electric or hand crank I recommend doing it outside because there is bound to be salt water spilled. 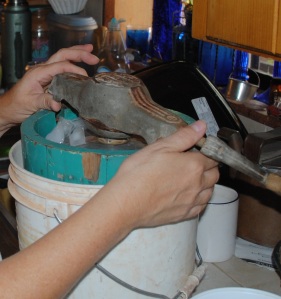 As far as the recipe goes, mix the ingredients together, best if you can do it ahead of time and then store in the refrigerator until ready to make. According to my folks, a chilled mix is best. We made ours early in the afternoon and then once it was as stiff as we could turn it we transferred the deliciousness to containers and put the freezer until we were ready. Back in the old days we would mix as much as we could then cover with additional ice and a blanket and just let it freeze harder in the mixer. 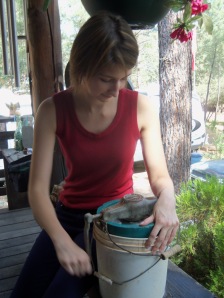 Just like in years gone by everyone was enlisted to help including the kids and grandparents. Matthew had to be convinced that he should crank longer than 30 seconds but with Grandma’s help he got in his fair share of turns.

This ice cream was so easy and so delicious that we will be making it again for our Labor Day festivities. We are excited to add this fun tradition back to our summer holidays. It is guaranteed to add good memories.  If you want to give it a try let me know what you think. And if you use a hand crank mixer be sure to send me a picture!