I forgot that I talked about teeth last month. But around here, it’s all about teeth.

After a second lecture from the dentist I promised to do a better job brushing Matthew’s teeth. I know you are asking, “Why can’t he do it himself?” And the answer is simple. He does but…and as you are reading this just say out loud: One. Two. Three. Done. Yes, that is how long Matthew brushes his teeth when left to his own devices. (He does the same shaving too.) He is always pleased that he has done it himself but the thoroughness is lacking.

So we bought the Oral B with a timer and I brush in the morning while Bob takes the night job. We’ve been using the prescription toothpaste for a year too. Still according to the dentist, brushing is only part of the solution. At the his recommendation we purchased fluoride varnish. The hygienist was going to track down how to order it but after some research we discovered it was available for purchase online without going through the office. 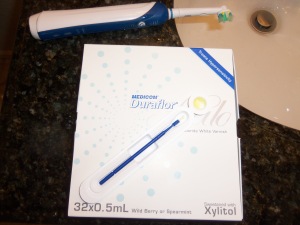 This tooth varnish is called Duraflor. It comes in a box of 32 little brushes and dabs of varnish. It’s not inexpensive, I think I paid $65 for the box. But if it helps Matthew’s teeth it will be well worth while. (Did I tell you we already take Matthew for a cleaning four times a year instead of the normal twice?) I don’t know why his teeth are so bad. Is it genetics? Is it the Celiac Disease or just diet? Is there some connection to Autism?

In any case, it’s his lot in life to have very weak teeth that are more prone to decay. (And remember, Matthew is like a cat when turned on its back when he sits in the dental chair… lots of wiggling and worry that doom is impending…) so we want to limit the amount of work he needs and strengthen his teeth as much as possible. We limit sugary drinks and candies but to date that has not been enough.

Which brings us back to the tooth varnish. Today was our first use. The varnish is…well, varnishy… it has some kind of nasty taste and smell, though this box is labeled spearmint. It stays liquid until it hits moisture, including saliva, so its important to paint it onto dry teeth. As soon as I started I realized Matthew’s salivary glands went into overdrive so speed is of the essence. We got it on. Since there was a little leftover I painted it on my own teeth and I can attest to the flavor. Yumm…not…and it has a lagging aftertaste that is equally unpleasant.

This picture really doesn’t show the effort needed to paint it on. I need at least four hands and a tongue pusher. I am hoping we figure out a more smooth way to do this. But I’m not expecting any miracles to put it on because after all these years of teeth brushing it’s still a daily struggle.

Back again to the varnish. Hey, the stuff is gluten free. The hygienist recommends we use it once a week. I also read several reviews from people who had used it weekly initially, with great success. Eventually, they transitioned to monthly use. Oh, and here is my disclaimer: Taking fluoride has risks, as well as benefits, so does having no teeth; there are possible reactions to the varnish and there are disclaimers on the box; and you should only use on the recommendation of your dental professional.

That said, I feel hopeful that the dentist will see solid improvement at our June visit. I’ll keep you posted.