Eight thousand miles in less than a month means every so often you have to put in a very long day. Today was one. We were on the road by 5 AM heading north out of Seattle and to the border crossing by 8. Apparently, our old truck and perhaps less than stellar attire…or maybe it was our answers to the questions…or maybe, as Bob suggested they looked me up and discovered I am pro Tea Party and Second Amendment Rights… anyway, something, led to a search for guns by the Canadian authorities. They asked us all sorts of rapid fire questions, “Did you bring any weapons along? Where are your guns stored? Do you own any guns? Where are they? Do you have any ammunition? When was the last time you stored blasting powder in your truck?” (Yeah, I know…I liked that last one too…) But finding no evidence of GSR (gunshot residue for all you city folk) they approved us for travel into Canada.

The countryside along the border of Washington and Canada is beautiful farm country. The Canadian side is flanked to the south by a staggering mountain reaching high into the sky and filled with rushing waterfalls. The north side held the mighty Fraser River an awesome powerful glacial river. Our trip today followed the Fraser up through the mountains finally ending at the Fraser Lake. This road was originally a trail used by gold prospectors.

Look at this little church. We saw a whole bunch of these at each mining camp along the river. They’re all the same vintage and look like they’re still in use.

The land is so rugged that when they were building the road they used a special steam powered boat and pulled it upstream through ropes anchored into the canyon walls. 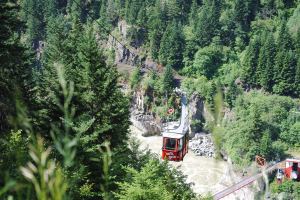 No I didn’t ride the tram. Didn’t even think about it.

We saw our first very real wildlife at the summit of the pass. A family of mountain goats munching on grass right alongside the road.

We spent the night at a Provincial Campground hosted by a friendly man who refused to charge us since we arrived late and were leaving early. I discovered that long days of driving do not make for an easy dinner time so decided I need to cook the food the night before and then all we have to do is heat through to eat and I can make the next day’s food while the gang is setting up the tent.

So isn’t this the coolest thing? Lucky Matthew got a flashlight helmet to wear in the dark from his CA friend Karen.

Matthew is not so sure about this tent camping thing. He is adjusting to this routine of travel each day but he doesn’t like when we start talking about where to ‘camp’ for the night. The unknown and unfamiliar challenge all of us at times, but especially kids like Matthew. Never the less, we press on. We’re listening to his familiar Adventures in Odyssey and the friendly voices of the characters are always a comfort to Matthew.

Across the border and all the way north to Fraser Lake!

Tomorrow: Travel West and then North or Travel North and then West?