There is a commercial for Ricola cough drops on TV.

I can’t watch the ad without remembering the last time I bought some. We were in a tiny village in Germany. A tremendous adventure for us, the first part we spent in England with a few days in Germany. Bob being of German heritage was supposed to learn the language. I admit, he did put the Rosetta CD on during the flight over. Since he fell asleep promptly, I assume he was hoping to learn through osmosis.

Anyway, we managed through hand gestures and lots of patience on the part of the Germans to order food, figure out where the lock was for the gas cap in the car, and how get to the castle that we could see but couldn’t seem to reach.

So there we were having fun shopping in Rothenburg when Rebecca tells me she is getting a sore throat. 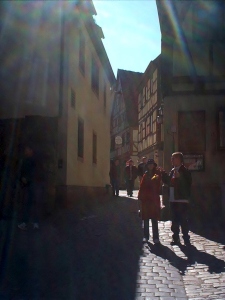 Luckily, I spotted an Apothecary shop and inside sure enough they sold Ricola cough drops. We recognized the name but nothing else about them. I told Rebecca we’d take the pink package, sure that they would be a nice fruity flavor.

But instead she choked and complained that they were pretty nasty. How could that be? Doesn’t pink mean yummy? Well, after we got on the airplane to come home I looked at the package again, this time with my German to English dictionary. Sure enough Salbei doesn’t mean yummy and candy like, instead it means sage, the potent seasoning you put on chicken. Bleck.

I guess it was a ‘don’t just a book by it’s cover’ situation. So now you know. And when you watch the next Ricola commercial you can remember poor suffering Rebecca.

One thought on “Ricola”