Okay, yes, he is now a young adult.  And it’s not a bragging point.  But, if anyone asks I tell them my child has special needs.  Like many of my friends who have special needs children we work every day on greeting others in a proper fashion and acting appropriately in public.

Not every family is this way.  Years ago I worked with a gal who had three children.  I had met a couple of the kids but not all.  One day I was organizing a shower for another coworker and this gal stopped by early to drop off her gift.  I noticed kids in the car and invited her in.  She was taken aback and looked worried.  No, the kids could not come in.  One of her children was handicapped and she didn’t want me to see him.

Really?  I was surprised.  The matter passed but the moment has stayed with me. Who could be so embarrassed by their child that they would hide him?  Haven’t we moved past those dark ages?

Today, I have a child who has special needs and I’ve learned there are few things in life that are cut and dry.

But, I’ve learned not to be embarrassed at Matthew’s uniqueness.  Oh, that’s not to say I am not “embarrassed” by him… things happen… like the time we were helping with dress rehearsal for a performance that included my daughter and my nonverbal son decided he was sick and barfed all over everything…the seats, the aisle, the kids (with horror struck eyes).  Yes, there have been plenty of times.  But as I think about it there were times when I was embarrassed by both kids.  I told Rebecca I was going to write this and she reminded me of the “stone throwing incident.”   She must have been 5 or 6 when we went to our favorite restaurant for dinner.  There was going to be a short wait so we sat in the lobby that had an old fountain in the center.  For whatever reason the fountain was filled with rocks.  And for a completely unknown reason my lovely, perfect children decided to throw the rocks.  I scolded them but they continued until I gave them the ultimatum: “If I see you throw another rock we are leaving!”  Wouldn’t you know, one of them threw another rock.  Well, what could I do?  Strangers were watching and I had to be consistent in my parenting so we marched out of there.  I was embarrassed.  Rebecca tells me she was embarrassed.  Poor Bob asked meekly in the car if we couldn’t stop at McDonalds to pick up something to eat… 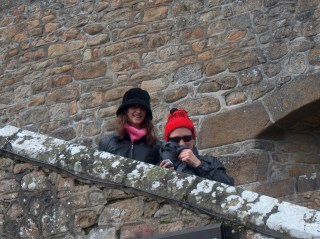 Those with children I’m sure will agree that all kids manage to embarrass their parents on occasion.  There is also no doubt that a special needs adult doing something inappropriate is less tolerated by the public than if it were a child.  We have some real challenges.  So sometimes, maybe more often than we should, our family chooses not to participate in certain activities because our child will stand out.  That said, I do hope one thing I have taught Rebecca is not to be embarrassed because her brother has special needs.

2 thoughts on “I Have A Child With Special Needs”